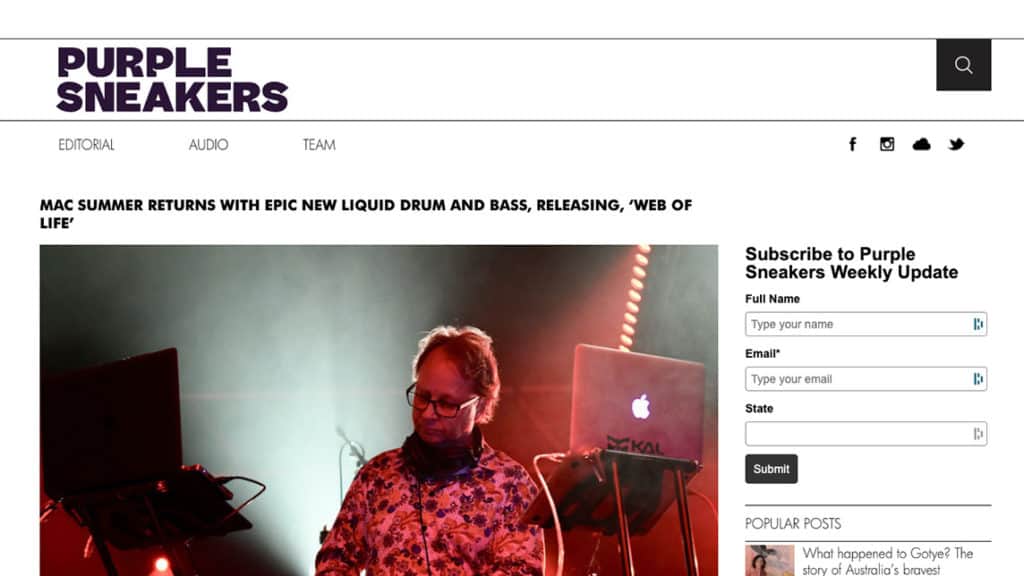 New Zealand born renowned producer and artist Mac Summer has released Web of Life, a tour de force of genre-defying contemporary electronica. The new track combines evocative atmospherics with hooks and a compelling vocal performance, ensuring across the board impact on global charts and streams and firmly establishing Mac Summer as one of the most exciting and accomplished music producers in the world today. With a tenure working as a producer in Los Angeles, the experience solidified Mac’s artistic prowess and vision, going on to produce numerous stylistically different music artists, including—as Malcolm Welsford—three albums for legendary band Shihad. Fans and critics alike have referenced The Prodigy, The Chemical Brothers, Netsky and many other celebrated artists when describing Mac Summer’s extraordinary sound. Following Mac Summer’s 2020 hit, Hands in Our Tills, Web of Life merges dark and light, a sonic metamorphosis of kinetic energy laced with elements of alluring surprises and arresting musical motifs. The track’s seductive intro teases with allusions to a guitar-like sound, but the mood is quickly modified with the drum and bass rhythmic core, confirming the song’s heartbeat. But there are many more surprises, not the least of which is a series of soaring melodic lines and cinematic synths, lush pads, and string additions—all creating a sophisticated yet uniformly emotionally potent mix. The track veers from a complex music amalgam of thoughtful and effective programming and multifaceted performance to developing into an electronica-based showcase of astute pop sensibilities. The vocal performance anchors these elements, providing a smooth transition from one section to another, particularly after the second chorus, where a series of bridge sections takes the track to more exploratory moments. Utilising the emotional power of an enthralling vocal, Web of Life captivates with searing dynamics and undeniable hooks, all the while harnessing the realm of electronica and dance to its fullest.

– This article was originally created and published by Purple Sneakers